Murrine are made by placing a series of small glass rods in a cylindrical metal mold to create an image or a pattern. The rods are fused and pulled out (like taffy) resulting in a cane. After cooling, cross cuts of the cane in thin slices results in the decorative millefiori (Italian for thousands of flowers). Intricately amazing images and words were created by Antonio Dei Rossi using the Murrine technique. Antonio (and his Father Mario) carried the Murrine from the craft level to an Art form (Karen Chambers)

Roll up technique involves first fusing a flat panel of glass and heating it up in a kiln to annealing temperatures on either a steel or ceramic plate. The panel still on plate is then removed from the oven and slowly heated to a malleable temperature in the glory hole. It is then rolled up on the end of a pipe to form a cylinder that is subsequently blown. The intricacy of this technique is illustrated by the work of Diego Feurer (images below).

Two of the artists participating in the ABC have incorporated painted imagery into their work. Mathilda de Carpentry paints the image on the back of a flat glass panel working backwards from the tiniest details to the larger background. The thickness of the glass gives a dimensional aspect to the painting. Alison Ruzsa uses enamel paints that are made from glass to infuse the painted images inside a solid glass form.

Metal and Glass. Usually the glass and metal will expand and contract at different rates thereby cracking the glass.
Soft metal, like copper is compatible with glass. Jorg Zimmerman blows glass through a mesh made of a special metal
(images below left).
Alex Bernstein uses the sparks from a metal grinder to infuse the glass surface with rust or other colors
(images below right). 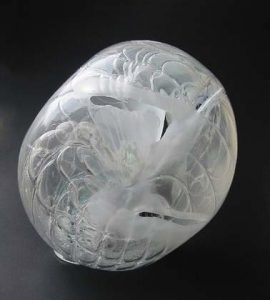 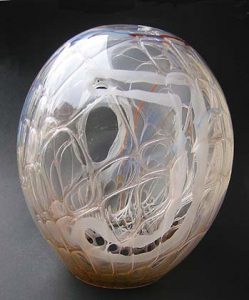 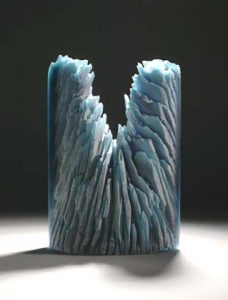 Dichroic Glass and other add on components

Many chemical compounds, such as cobalt, gold, silver, cadmium, barium and lead can be added to the glass in order to achieve clarity or an array of colors (Odorica). Some additives are toxic and should not be used no matter how much they enhance the optical quality of the glass. 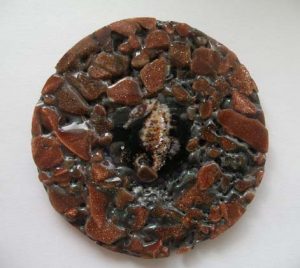 Aventurine and Dichroic are relatively new types of glass. Aventurine Glass was discovered by chance, hence its name (from the Italian word for chance, Avventura). The sparkling effect of the Aventurine (Dei Rossi, above) is due to the metal oxide incorporated in the glass (copper)

Dichroic Glass is formed by electroplating various metal oxides on the glass resulting in a spectrum of strikingly bright colors. Understanding dichroism is problematic and requires some knowledge of physics and optics. We are grateful for the help of the Physicist (and Glass Art Connoisseur) Scott Bartky and that of the Artist – Physicist Sherburne Slack.
The text that follows is a digest of their input.

Dichroic color is not a pigment or a dye. Whereas the usual glass achieves its color by absorbing all the colors you don’t see, dichroic glass achieves it through light waves loosely interfering with each other while passing through ultra thin layers of metal oxides, vaporized on the glass in a vacuum chamber.
These films of metal oxides represent the multilayer interference filter.
It is in this layer, over 100 times thinner than human hair, that dichroism,
the property of exhibiting different colors by reflected or transmitted light, occurs.
The result is a transparent, yet highly reflective colored surface.
The specific color is determined by the types of oxides, their thicknesses and the viewing angle.
You can quickly determine if the glass is dichroic by tilting it and seeing the color changes.

Although the principles of multilayer interference filters were known in the late 1800’s, it wasn’t until the 1920’s and 1930’s that vacuum techniques advanced to the point where dichroic filters could be fabricated in a laboratory setting. In WWII the need for more and better optical instruments resulted in the development of large industrial vacuum plating systems. Although these systems were primarily used for mirrors and optical coatings, they were nonetheless capable of depositing multi-layer films. In the late 1940’s, the techniques of accurately and repeatable controlling the thickness of very thin films were developed and large scale production of dichroic filters became possible. They were used as reflectors in film projection lamps. They were truly dichroic in that they reflected the visible light towards the film and transmitted the heat out the rear keeping it from burning the film. In the last 50 years dichroic filters have found their way into literally hundreds of applications ranging from eye-catching plastic materials to measuring the makeup of atmospheres on Jupiter’s moons. 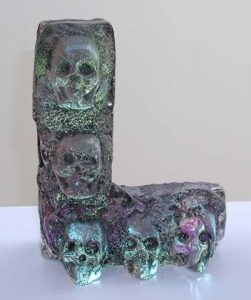 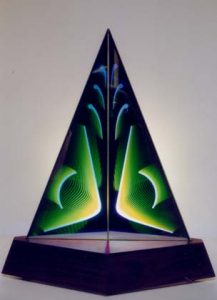 The first artistic use of dichroic glass was in Britain, in the 1960’s. Its widespread use was in the late 90’s when the manufacturers of the filters began depositing them on well known fully characterized artistic glass
Sherburne Slack’s sculpted letters are very good examples of dichroism in glass art (above left).
Dichroic glass is a major component of Michael O’Keefe’s work (above center)
A touch of dichroism enhances significantly Ray Howlett’s light sculptures (above right).

Man did not create dichroism, Nature did. Dichroic colors are the result of the same physical laws that are responsible for the iridescent of opalescent crystal, the butterfly wings, the scales of tropical fish and also the colors produced by oil on water. The oil is spread so thin that the thickness is on the order of the wavelength of light. Different colors have different wavelengths. When the layer’s thickness is the same as a particular color, that is the color transmitted through the layer and the reflected one is a combination of the remaining colors of the spectrum.