Cold Work refers to methods that work with the glass in its cold state (not molten or moving). The commonly used cold work is Sandblasting, Engraving, Etching, Cutting, Grinding, Polishing, Painting, and Bonding. Each of these allows an array of possibilities, and are very important steps in finishing work that begun in the molten state

Sandblasting (sand carving) is a process where the glass is textured or removed by blasting it with sand under high pressure. Hand grinding to a buff surface differs from sandblasting in that every edge is defined rather than rounded, and that the surface will not absorb oil from the hands. However, it is very time consuming. Christine Barney did it for her Passage Sculpture (p 31). The buffing results in a delicate satin like surface. In the Overlay two bubbles are blown and one is rolled over top of the other to create overlapping layers of color. Think of starting with an inside out sock and rolling it onto your foot. Cameo glass involves carving part of the outer layer to make the second color surface. The Romans were making very sophisticated cameo glass in the first century AD. Eric Rubinstein used a variation of this technique for his award winning Multicultural E. After Steven Gillies blows a vessel overlay, his wife Kate Jones prepares a design with thin strips of masking tapes and sand carves it out. The result is their signature work of streaming textured lines, well illustrated (above) with the sculpted vessel, V is…
Battuto (Italian for beaten) is a process where the glass is roughly faceted with grinding wheels. Incisura is a form of engraving where the glass is incised with a diamond or metal tool. Etching usually refers to an acidic chemical process where the acid it applied to the surface of the glass to frost it.

Lampworked Glass is a method of manipulating small rods and tubes of glass in the flame of a torch (hence the other appellation, Flamework). The glass used to be heated over small oil burning lamps, hence the appellation Lampwork. In the fifteenth century a kind of soft glass was developed to melt at lower temperatures in order to accommodate this technique. It was used to make small-scale sculptures, and commercial glassware without the overhead expense of glassblowing. Today, Lampworking has become an important facet of glass art. Unique Work is created with torches that burn oxygen and propane and can produce much higher temperatures, and a larger flame. Artists as well as blowers of scientific glassware, use a glass made of a borosilicate base (hard glass, Pyrex), which was developed in the United States in the 20th century by Corning. It can withstand higher and more drastic temperature changes without cracking or boiling. 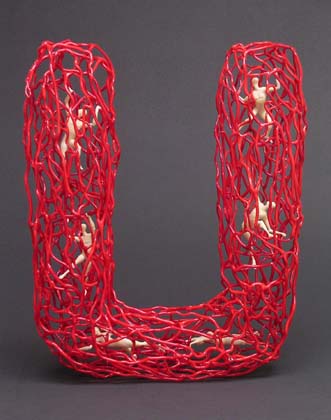 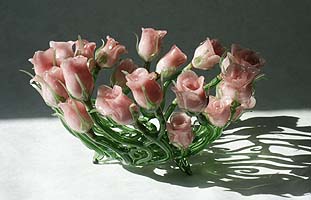 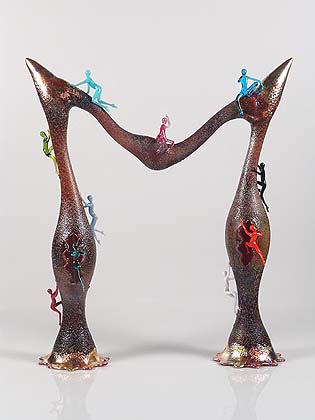 Several of the participants in the ABC exhibit have used lampwork to demonstrate the limitless potential of this technique. Using soft glass, Mauro Bonaventura combined the realism of the human figures with the abstraction of their setting
Bonaventura’s Ulysses (above left) illustrate the use of bright colors, typical of soft glass.
Recently, however, bright colors became available for borosilicate glass (Mickelsen’s M, above right).
The subtle colors in borosilicate glass are illustrated in David Willis’ Flower Form (above center)
With this hard glass, Bandhu Dunham created a Kinetic Sculpture.
Julius Weiland’s Jin is made of fused borosilicate tubes used for scientific glassware