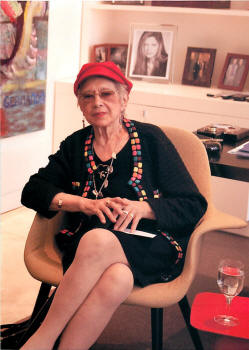 Dr. Agnes Varis was a businesswoman and philanthropist who will be remembered for her passion for women’s rights, the underprivileged, animal rights and the arts. She is considered one of the founders of the US generic drug industry. She resided in New York City with her husband Karl Leichtman who preceded her in death.

Agnes Varis was born in Lowell, Massachusetts in 1930, to first generation Greek immigrants of limited means. The family moved to Brooklyn, NY when Agnes was two years old. She was the youngest of eight children and the only one of them to attend college. She earned her degree in Chemistry and English from Brooklyn College. She later attended New York University’s Stern School of Business. In 2005, she was awarded an honorary Doctorate Degree by Tufts University for her many contributions to the Veterinary School.

Dr. Varis used her wealth to promote the many causes that were close to her heart, never forgetting her humble upbringing. Many of her donations were for the less fortunate and to promote education for those who could not afford it.
In 2010, Dr. Varis was appointed by President Barack Obama to the President’s Committee on Arts and Humanities (PCAH). The committee includes 26 leading citizens from the private sector who have an interest in and commitment to the humanities and the arts.
Her favorite author George Bernard Shaw captured her spirit when he wrote: “This is the true joy in life – that being used for a purpose recognized by yourself as a mighty one. That being a force of nature, instead of a feverish, selfish little clod of ailments and grievances complaining that the world will not devote itself to making you happy. I am of the opinion that my life belongs to the whole community and as long as I live it is my privilege to do for it whatever I can. I want to be thoroughly used up when I die. For the harder I work the more I live. I rejoice in life for its own sake. Life is no brief candle to me. It’s a sort of splendid torch which I’ve got to hold up for the moment and I want to make it burn as brightly as possible before handing it on to future generations.”

Dr. Varis was a leading advocate for public access to affordable pharmaceuticals, and was an indefatigable advocate for legislative initiatives. She was one of the founders of the modern generic drug industry, and a key player in the adoption of the Waxman-Hatch Act of 1984, creating a streamlined approval process for generic pharmaceuticals. Notwithstanding significant obstacles based on her gender and a Pharmaceutical Industry that was not willing to give up their huge profits, she succeeded.
Agnes remained active in the generic drug arena. She was one of the founders of the Generic Pharmaceutical Association (GPHA). As recent as early 2011, she actively participated in the Generic Drug End User Fees being debated.
Today, generic prescriptions account for more than 70 % of all prescriptions filled in the United States saving consumers billions of dollars annually.

At the height of the AIDS epidemic in Africa, and after the combination therapy proved effective in AIDS, behind the scenes Agnes helped broker an arrangement between the Clinton Foundation and an Indian generic pharmaceutical company to provide affordable AIDS medications to African nations at a very low cost.

Following the 9/11 attacks on the World Trade Center, Dr. Varis provided supplemental pharmaceutical coverage to many World Trade Center families directly impacted by the attack and who did not have insurances to obtain needed drugs

Agnes also served on the board of directors of the National Organization for Rare Disorders (NORD), which recognized her in 1999 with their Industry Leadership Award. Agnes is a member of the Lincoln Center’s Consolidated Corporate Fund. Agnes serves on the Board of Directors of the Eleanor Roosevelt Legacy Committee and is a Managing Director of The Metropolitan Opera. As president and trustee of the MAKK Foundation, she supports a number of arts, education, and social service organizations.

The Arts: Help and Accessibility

As a child, Agnes played classical music on her piano in a household where she was the only one who could appreciate the value of the art. Down the road, she befriended a fellow Brooklynite, Beverly Sills who convinced her that her business savvy was needed at the Metropolitan Opera. She volunteered to help and accepted a position of Managing Director.

Dr. Varis was one of the Metropolitan Opera’s most generous and engaging Board members. She was committed to bringing opera to the widest possible audience including those who could not afford tickets. She funded the enormously popular Agnes Varis and Karl Leichtman Rush Tickets program, which offers expensive orchestra seats for $20 – $25. The program launched in 2006. She designated a portion of the seats she subsidized to be reserved who could obtain them without standing in line. Matthew Gurewitsch wrote about the Rush Ticket Program in a Wall Street Journal Article (October 12, 2003) entitled, “You have her to thank for cheap, good seats at the Met.”

Dr. Varis also underwrote the Met’s series of open rehearsals, which invites the public – many of them students – to see the final dress rehearsals of new productions for free. A supporter of contemporary work, Dr. Varis funded the Met’s new productions of Philip Glass’s Satyagraha, in 2008, and John Adams’s Doctor Atomic, in 2009.

In 2005 she inaugurated the Met’s the Beverly Sills Artist Award, an endowment of $50,000 each year for an upcoming Opera singer. Agnes’ photo on this page is during the 2011 Award presentation
In 2004, Agnes became involved with The Jazz Foundation of America which eventually earned her the title “Saint Agnes.”. Her work included providing funding and creating employment opportunities for America’s elderly jazz and blues musicians. Through her work in response to Hurricane Katrina, in 2006 the Jazz Foundation of America established the Agnes Varis Musicians in the Schools Program, first reaching out to displaced New Orleans musicians and subsequently employing more than 1,000 musicians in eight states, including some 120 elderly jazz and blues musicians performing free concerts in New York City public schools, hospitals and nursing homes.[3]
Agnes admired Winton Marsalis and was a great supporter of the Jazz at Lincoln Center. In 2010, she offered $3 Million to renovate the recording studio in the Time Warner Building and named it after her husband Karl Leichtman who was a great music connoisseur.

In the Political Arena

Dr. Varis was a devoted and influential Democrat who helped steer the Party platform at the National level for many years. Dr. Varis was not one to cower to the likes of Presidents , Governors, and Senators. She spoke her mind and fought for her views. In the 1960’s, a letter to President Kennedy opposing sending troops to Vietnam landed her with an FBI file.
She was close to both Presidents Clinton and Obama. She generously donated to the Party. Robin Stein wrote about that in a New York Time 2003 article (October 19) titled The Democrats’ Fairy Godmother. In 2004, she was the 24th largest individual contributor to 527 groups, donating over USD 2,000,000 to pro-Democrat groups.

Dr. Agnes Varis was passionate about animals and was a transformational benefactor of the School of Veterinary Medicine at Tufts University. She was a long-time member of its Board of Overseers and the Tufts Board of Trustees (2004 – 2009). Dr. Varis provided naming gifts at the veterinary school for the Agnes Varis Campus Center and Auditorium, the Agnes Varis Lecture Hall, and the Varis Cat Ward in the Foster Hospital for Small Animals. She donated the Agnes Varis University Chair in Science and Society, dedicated to exploring scientific discovery and its impact on humankind. She and her husband, Karl Leichtman, were benefactors of the Granoff Music Center on the Tufts Medford campus.

Dr. Varis also supported summer research fellowships for veterinary students and her philanthropy made possible advancement of the graduate studies program at the veterinary school. She was particularly dedicated to helping women and appreciated that nationally and at Tufts, veterinary professional classes are predominantly (70 – 85%) female. She served as a tremendous role model for veterinary professional students and encouraged entrepreneurial attitudes and confidence in those she mentored.

Agnes was as inspired by students as she was inspiring to them. “I see all these young people who want to change the world, which gives me hope for our country,” she said. “Tufts builds citizens of the world. That’s our mission, and boy, do we need it more than ever. I have a lot of pride in the school.” Interacting with students at Tufts, “I see life as I saw it when I was in college when I was 17, and I’m 75 now,” Agnes said. “The basic thing of doing something for society in your country, giving back something, is there.”

For her powerful commitment to active citizenship Dr. Varis was presented in 2003 with the Tufts honorary degree of Doctor of Public Service, Honoris Causa, by President Lawrence Bacow.

Dr. Varis cared deeply about individuals – animals and humans. She was particularly devoted to the welfare of cats and derived great joy from her own cats, most recently Zeus and Kallee. When Zeus was diagnosed with lymphoma, a common cancer seen in animals and people, Agnes realized how difficult it was for pet owners to manage the cost of treating cancer in their pets. She responded by creating the Zeus Varis Fund, administered through Tufts University and through a veterinary oncology specialty group in New York City. Animals and their owners have been served through this fund in ways that have prolonged life and sustained the special human-animal bond that Agnes so valued. A second fund, the Kallee Varis Emergency Animal Fund, was also established in honor of her beloved cat, Kallee.

Dr. Varis melded her love of music and of animals when she donated a grand piano to the Tufts veterinary school for placement in the Agnes Varis Auditorium. One of the early events held in her honor in the auditorium was a Concert for the Animals that attracted specially trained and certified dogs, cats and a miniature horse that work with the veterinary school’s pet-assisted activities group, Paws for People.
Agnes was passionate about animals – especially cats. When her cat, Zeus needed costly chemotherapy for lymphoma, Agnes realized how many pet owners could not afford comparable treatment for their pets. She established two funds to provide financial support to these pet owners – the Zeus Varis Funds – one through the Veterinary School in NY and one through Tufts University in Ma.
More recently she funded Kalle Varis Emergency Animal Fund in the name of her other cat.

In her professional life, Agnes Varis was a vocal opponent of career restrictions on woman. Over the years, she took many young women under her wing and acted as a mentor and role model to them. She helped them to believe in themselves as equals to their male counterparts and many successful women today can credit part of their success to Agnes’ mentoring.

She championed many women causes throughout her life. She and her husband Karl were great admirers of the American Opera Conductor Eve Queller. Agnes urged the Metropolitan Opera to facilitate for more women to have the opportunity to conduct through programs at the Julliard Music School

After Agnes was diagnosed with cancer and met other patients in the radiation therapy waiting room, she decided to do something special for them. She worked with her Oncologist, Dr. Gaby Sara at Roosevelt Medical Center in NYC and funded Cleopatra’s Touch. It consists of providing women with cancer the opportunity to be beautified by specialists during the course of their therapy. It includes a haircut, make up, nail polishing, and a massage – a true Agnes touch.